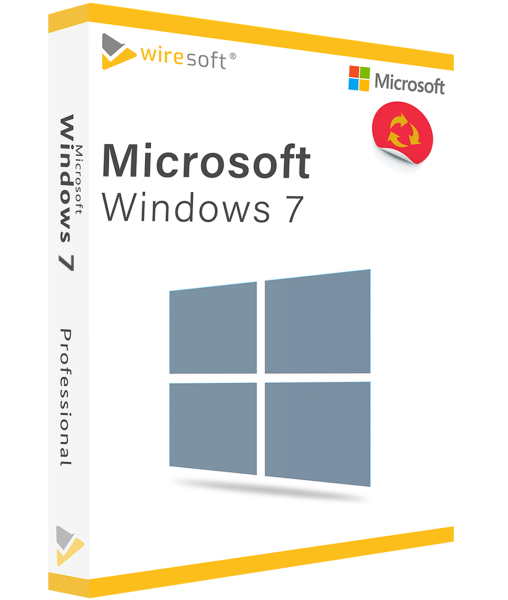 Despite numerous successors still popular and in use in many networks: Windows 7 Professional  runs on many computers, which is no doubt due to its reliability and stability. Many additional programs can also be run without problems on Windows 7 Professional and related editions. Especially the Professional Edition in particular offers a number of features that still play an important role in SMEs, including the practical XP mode, which offers the continuous use of older system components and is therefore an important reason for purchase for many users.

Despite numerous successors, it is still popular and used in many networks: Windows 7 Professional runs on many computers, which is undoubtedly due to its reliability and stability. Many additional programs can also be used on Windows 7 Professional and related editions. The Professional Edition in particular offers a number of features that still play an important role in SMEs, including the practical XP Mode, which offers continuous use of older system components and is therefore an important reason for many users to buy.

With the Professional Edition of Windows 7, companies and professional users are provided with a number of additional functions compared to the other editions, which significantly expand the application scope of the Microsoft operating system. The most important feature is the already mentioned Windows XP mode for higher compatibility, but also the domain entry offers greater security especially in companies:

With the XP Mode Windows 7 does not connect to older operating system versions such as the name-giving XP, but on the contrary ensures the continuity of business processes: This means that older business programs based on Windows XP can continue to run directly on the Windows 7 desktop, which is a major advantage of Windows 7 Professional, especially for SMEs for which XP Mode was primarily developed. Vista drivers also work with it.

The XP mode was consequently developed for programs that no longer function even in compatibility mode. It works as a virtual machine running Windows Virtual PC, a version of Virtual PC that has been specially enhanced for Windows 7.

By default, the drives of the main computer are still available as network drives. New drives and USB devices connected to them are automatically detected in XP mode, and the Windows 7 clipboard and XP mode can be used simultaneously. This means that older hardware used via USB for which no driver is available can continue to be used without any problems. The only restriction is that in XP Mode, the other 3D acceleration has to be omitted.

XP Mode is available as a separate download, just like Virtual PC, but can only be used with at least Windows 7 Professional. It consists of Virtual PC, the Microsoft virtualization software, and the virtual hard disk (VHD) with XP SP3. Further requirements are a CPU such as AMD-V or Intel-VT, which supports native virtualization, and 2 GB RAM.

Domain joining in Windows 7 Professional connects a computer outside a company to the computer network at work. This allows users to use the resources available there, while admins can manage the PCs connected via access rights etc. The domain joining offers more efficiency and at the same time a higher security.

Windows 7 Professional makes domain joining not only safe but also easy: The user-friendly wizard guides users through all the necessary steps.

It doesn't sound like much, but it is a very practical feature in everyday work: the location-based printing included in Windows 7 Professional is very practical, especially when working at different locations with different networks, which therefore have different printers at the ready: Preferred printer-network pairs can be configured using this function; Windows 7 Professional automatically selects the right default printer depending on the network connection.

Windows 7 offers improved touch technology. It allows users to browse online issues of magazines and photo albums on their devices and to arrange files and folders on the desktop. And in Windows Paint, users can now paint with their finger. Windows Touch also recognizes multi-finger movements, for example to enlarge pictures; even right-clicking can be done by touch, where one finger taps a specific item while the second finger taps the screen.

In general, the appearance of Windows 7 has also been revised, including some frequently used features. This applies especially to the desktop or the display of the program windows and their adjustment, but also to the performance of games and the playback of videos etc.

The desktop display already contains a number of practical innovations and details that make the use of Windows 7 simplify and make it more convenient.

In order to create more clarity when windows are open, the already known Aero design has been improved and supplemented, they are still displayed in transparent Aero Glass mode:

DirectX 11 is the new multimedia component that brings not only higher performance and more speed, but also greater efficiency - this is particularly noticeable in PC games, but also brings benefits to other graphic applications, such as videos, through multimedia acceleration:

Other new features in Windows 7 Professional and other editions

Windows 7 also has a lot to offer in the technical area, which accelerates the use of the operating system and thus also contributes to an improved user experience:

Hardware requirements for Windows 7 Professional and others

Windows 7 Professional from Wiresoft buy cheaply in our online shop

Buying software is always cheap and safe with Wiresoft! Wiresoft therefore only sells original Microsoft Windows 7 Professional software. The purchase of used software offered in the Wiresoft software shop does not represent a legal risk, because trading is clearly permitted by law, which is proven by legally binding judgements. Therefore you can download and install the Windows 7 Professional software immediately after successful completion of the purchase process and activate it with the volume license key that is only valid for you.

The purchase of used software such as the Windows 7 Professional desktop operating system at Wiresoft offers our customers a favourable alternative to many current software offers. Our customers are mainly SMEs and organizations, but also self-employed persons and private individuals who already benefit from our inexpensive software offer!

In the Wiresoft software shop you will find Windows 7 Professional, newer versions of this Windows desktop operating system and other Microsoft programs as inexpensive used software for immediate download. If you have any questions about this or any other Microsoft software, simply use our competent advice in the chat or by e-mail or telephone.