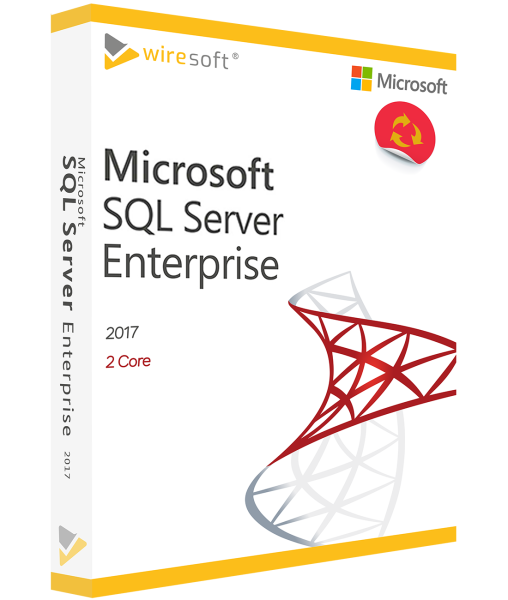 The SQL Server 2017 Enterprise  edition provides larger companies with a powerful newer version of the proven relational data platform from Microsoft, which combines all the critical database, reporting and analysis functions and combines them with maximum performance. The SQL Server Enterprise   edition also offers new comprehensive features, plus virtually unlimited virtualization and comprehensive Business intelligence - at a high level of service - for mission-critical workloads and critical data analytics.

This SQL Server Enterprise Edition is ideally suited to meet all the requirements of a modern, high-performance relational database management system - as is typical for the provision of enterprise resource planning systems, ERP software and CRM systems. It provides all the important functions to make Microsoft SQL Server a comprehensive, secure data platform in many enterprise environments, with various options for use: Choose between different development languages and data types as well as operating systems to provide SQL Server not only for Windows but also for Linux and Linux-based Docker containers - as well as between the options of running locally or in the cloud. Benefit from new insights through In-Database Advanced Analytics with Python or R as well as interactive visualizations including many performance improvements in Master Data Services and Reporting Services.

The Enterprise edition of SQL Server 2017 offers the maximum features and scalability available for this version. In addition to unlimited virtualization, it also provides advanced high availability with Always On availability groups, failover on multiple databases and readable secondary replicas, as well as Transparent Data Encryption and compatibility reporting via SQL Server Audit and Advanced Data Integration with fuzzy grouping including lookups, further also the creation of mobile reports and KPIs.

Additional Business Intelligence features include enhancements to multi-dimensional models, tabular models and data mining, as well as DirectQuery storage mode and access to the Power BI reporting server. With extensive integration of machine learning features, SQL Server 2017 Enterprise 2-Core provides full parallelism for R and Python analytics, including the ability to run both on GPUs as well.

In the areas described close below, the respective specifications apply to the SQL Server 2017 Enterprise 2-Core edition in terms of functionalities as well as their scalability, performance and high availability, among others:

CLR assemblies can now be added to a list of trusted assemblies; further, new availability group functionality includes support for read scaling without clusters, setting minimum replicas for commit availability groups, and the ability to migrate from Windows to Linux across operating systems.

Key SQL Server Analysis Services (SSAS) enhancements include the DAX editor for SSDT and optimizations to tabular models, with improved object-level security when saving metadata; a tabular mode is also suggested as a default installation option for Analysis Services. With Get Data, new data sources are available in Power Query; existing data sources are supported in M queries. Using Date Relationships, relationships based on date fields can be easily created.

In SSIS the Scale Out function offers changed as well as new features, among others the execution of SSIS on multiple PCs has been simplified. Scale Out master now supports high availability, and the failover handling of the execution logs of Scale Out workers has also been improved. The feature also includes the Use32BitRuntime parameter to trigger execution, making it DABEI much easier to run SSIS on multiple computers. Furthermore, SSIS Catalog has another global property to specify the default mode when deploying SSIS packages and also supports SQL Server on Linux: SSIS packages can be executed on Linux via the command line.

In SSRS, comments are available for reports to add collaboration with other users, and attachments with user comments can be integrated.

In MDS, a sorted list on entities, collections, and hierarchies can be viewed via  the Explorer page, and performance has been improved for serving millions of rows.

In SQL Server 2017 release, the previous SQL Server R Services have been renamed SQL Server Machine Learning Services, as Python is now supported in addition to the R programming language. The Machine Learning services can therefore be used to run Python or R scripts, to deploy R and Python models that do not require SQL Server, while the Microsoft Machine Learning server can be installed. Developers also have access to the ML and AI libraries for Python in the open source environment.

Below is a brief overview of the performance and included features of SQL Server 2017 Enterprise for the key areas mentioned:

The SQL Server 2017 Enterprise areas listed below each provide the maximum of the operating system or memory:

For the following features in SQL Server 2017 Enterprise:

Only the core licensing introduced by Microsoft with the 2016 Server release applies to the SQL Server 2017 Enterprise edition. The Server/CAL licensing available for other editions is therefore not available here. Core-based licensing uses a different licensing metric than older versions of SQL Server, where it did not matter how many cores a processor contained: Now their number is the basis for determining license requirements. This licensing model by cores also applies to hybrid use and cloud deployments.

In cloud-compliant licensing, one core license is required for each of two cores. The total license requirement thus results from the maximum number of cores per processor. All physical cores of a server require their own core license. The minimum number of licenses per server is always eight. Microsoft has defined the following conditions for this:

Core licenses for SQL Server 2017 Enterprise Edition are available as packages of 2.

The offered used software for SQL Server 2017 Enterprise does not differ from a new SQL Server license in terms of its usability - also because software does not wear out. This is further characterized by the following features:

The used SQL Server 2017 Enterprise 2-Core license software offered at Wiresoft originates from a company located in Europe, which purchased it and later sold it to Wiresoft. When reselling, the SQL Server license is marked as used software, but it can be used again like a new license.

Wiresoft used software for SQL Server 2017 Enterprise 2-Core offers you as a customer the same advantages as the purchase of a new server software: buyer security through immediate download after completed purchase and immediate license activation with the supplied valid license key.

As a Wiresoft customer, you can be sure that both your purchase and your actual use of SQL Server 2017 Enterprise 2-Core as used software do not violate any valid laws. This is because the SQL Server software offered in the Wiresoft Shop comes from a company's licensed inventory. The valid jurisdiction allows not only the trade with Microsoft used software, but also its actual use; these facts have already been confirmed by several court rulings.

At Wiresoft, you will not only find the SQL Server 2017 Enterprise 2-Core edition at a reasonable price as used software, but also other editions for SQL Server 2017 as well as for licensing based on Server/CAL licenses, as well as newer versions of Microsoft SQL Server; in addition, Wiresoft's used software portfolio also includes many other Microsoft programs - with all the advantages mentioned. If you have any questions regarding your core licensing of SQL Server 2017 Enterprise 2-Core, please feel free to use our competent advice via chat or by e-mail or phone.