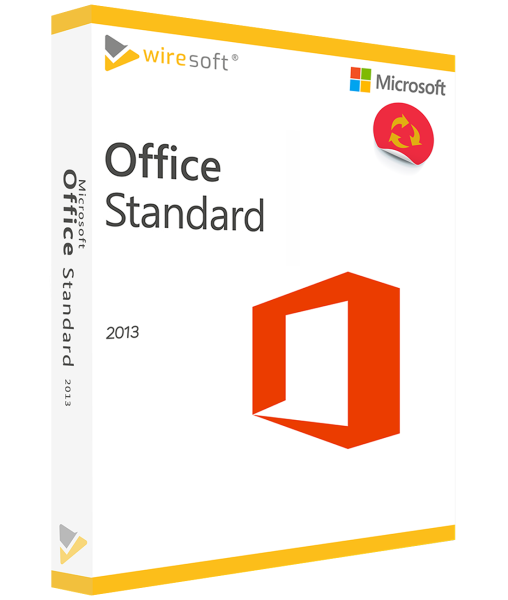 The MS Office-Suite 2013 Standard  offers with its variety of proven programs and efficient functions everything that a modern office software must have to fulfill the typical tasks that arise in the modern Business everyday life in the organization and management of tasks and projects. The numerous intuitively usable tools support users in all areas: from communication to the creation of text documents and spreadsheets when processing extensive data to the spontaneous recording of ideas and notes that can be used immediately for vivid presentations.

Microsoft Office 2013 Standard - the edition for business and private

The MS Office 2013 Standard, with its wide range of proven programs and efficient functions, offers everything that a modern office software must have in order to fulfil the typical tasks that arise in the organisation and management of tasks and projects in modern day-to-day business. The numerous intuitively usable tools support users in all areas: from communication to the creation of text documents and spreadsheets when processing extensive data to the spontaneous capture of ideas and notes that can be used immediately for vivid presentations.

Many features can also be used touch-optimized on devices such as tablets and smartphones via finger input mode, including a particularly clear display of buttons and commands on the touch-sensitive interface.

Microsoft Office 2013 Standard is still one of the Office that is most commonly used on a desktop PC; one of the reasons for this is its compatibility with Windows 7, so that all the programs it contains can be used without any problems on older computers. This makes this Office particularly attractive for private users, but also for self-employed persons and smaller companies. In addition, Office 2013 Standard also offers the option of storing data and documents on Microsoft SkyDrive, making them available in the cloud and also allowing them to be shared via SharePoint and edited jointly by several users at the same time. In addition, the connection of Outlook to Facebook and other social media channels extends the possibilities for sharing information.

The Office 2013 Standard is available from Wiresoft as a purchase version for single users. Below you will find an overview of the most important features and extensions of the included Office 2013 software programs.

All the major new features in Word for Office 2013

The most noticeable new feature of Word 2013 is the new reading mode, which offers a much improved reading experience, particularly noticeable in longer text documents. In particular, the automatic column splitting enables a stronger focus on important content and thus increases concentration while reading.

The improved collaboration with PDF documents and the clear selection of all format templates is also particularly practical. The following new functionalities should be mentioned in particular:

Excel 2013: The most important new features

Office 2013 Standard also includes several new tools for the proven spreadsheet software, which primarily support users in processing large amounts of data. For example, the program recognizes patterns when editing data sets and automatically completes them. Different workbooks can each be displayed in a separate window, which makes it easier to work on several Excel documents simultaneously, etc:

PowerPoint 2013: The most important innovations

Microsoft PowerPoint 2013 includes, among other things, a number of new designs and animations to expand the possibilities for presentations. The additional widescreen designs even take this literally. In addition, the new PowerPoint offers a speaker's view, which shows the presenter his notes, the audience of course only the slides:

Outlook 2013: The most important new features

The new Outlook 2013 is especially apparent when opening the program: Compared to the previous version, the new desktop interface looks much clearer. The navigation bar, which is used to switch between e-mails, contacts and calendar, is now located at the bottom of the screen. This creates more space for all other content. Outlook 2013 also has new features in other areas:

OneNote 2013: The most important new features

The new touch app makes OneNote even more practical. It allows you to create and insert notes into a document without using a mouse or keyboard. Handwritten entries are converted cleanly into printed text.

The Office 2013 software is available for download in two versions: 32-bit and 64-bit. Individual hardware requirements - such as memory requirements - may therefore differ. The following minimum requirements must be observed:

In the Wiresoft software shop you will find the Standard the Office 2013 version - it includes the following programs:

When you purchase the Standard of Office 2013 as a single-user license, you benefit from these advantages in addition to the fabulous price of used software from Wiresoft: