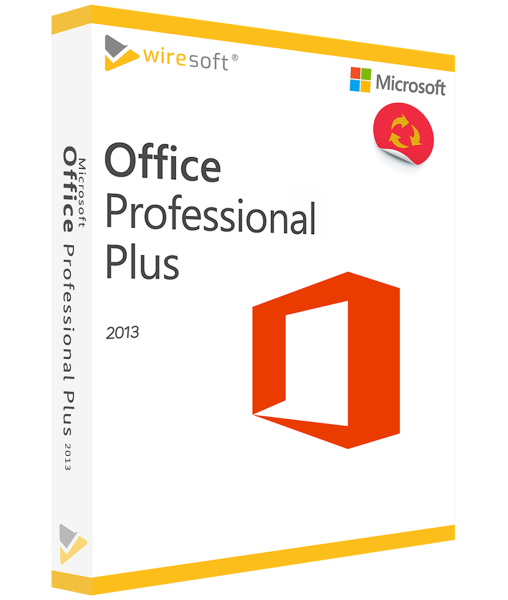 The MS Office-Suite 2013 Professional Plus   is the most comprehensive software package available for this Office-version. In addition to current, powerful program versions of Word, Excel, PowerPoint, OneNote as well as Outlook - incl. Business Contact Manager - it also includes Publisher and Access as well as InfoPath, Lync and Office Web Apps. Thus, the Office-Edition 2013 Professional Plus brings everything in terms of features and intuitively usable tools to more than cope with the Business-requirements of a modern company: From modern communication with multiple participants, also via video, to the creation of browser-compatible forms and the development of apps, to the classic Office-programs for word processing, spreadsheets as well as for vivid presentations and professionally designed publications.

The MS Office 2013 Professional Plus is the most comprehensive software package available for this Office. In addition to current, powerful program versions of Word, Excel, PowerPoint, OneNote and Outlook - including Business Contact Manager - it also includes Publisher and Access as well as InfoPath, Lync and Office Web Apps.

Thus, the Office 2013 Professional Plus has all the features and intuitive tools to more than just meet the business requirements of a modern company: From modern communication with multiple participants, including video, to the creation of browser-compatible forms and the development of apps, to the classic Office for word processing, spreadsheets, as well as for vivid presentations and professionally designed publications. In addition, the SharePoint 2013 and Lync 2013 applications, which are also integrated, enable users to share and communicate files and information directly in real time. Last but not least, many features are touch-optimized for use on tablets and smartphones.

A further argument for purchasing Professional Plus is also its compatibility with Windows 7, which means that this edition, including the programs it contains, can also be used on older computers without any problems. Office 2013 Professional Plus also offers the option of using Microsoft SkyDrive to store data and documents so that they can be shared and edited by several users in the cloud.

The MS Office 2103 Professional Plus - normally only available for volume license customers - is also available from Wiresoft as a purchase version for single users. With a single license, also self-employed persons and companies of smaller size benefit from the plus of programs which only this Office has to offer. The following overview presents the most important features and extensions of the different Office 2013 software programs.

All important innovations in Word for Office 2013

Word 2013 provides a much better overview - not only when editing text, but also when reading it. It also makes it even easier to collaborate and use PDF documents and Word documents created with an older version of the program.

The most important innovations in Excel 2013

Excel also includes several new tools in Office 2013 Professional Plus that allow you to analyze large amounts of data. The spreadsheet software now recognizes user-typical procedures when editing data and completes them automatically. Furthermore, the optimized PivotChart and PivotTable functions are available in Excel 2013.

The most important new features in PowerPoint 2013

Microsoft PowerPoint 2013 Professional Plus has extended the design possibilities of presentations with a number of new designs and animations. The most striking feature is the widescreen design. The new PowerPoint also includes a practical speaker's view and supports media formats such as MP4 and MOV, high-resolution content and codecs.

The most important new features in Outlook 2013

Outlook 2013 presents itself with a much clearer desktop interface. By moving the navigation bar for e-mails, contacts and calendar to the bottom of the screen, more space is created for other content.

Access is an exclusive component of the MS Office 2103 Professional Plus. The database software combines the Jet Engine relational database management system with powerful tools in an integrated development environment to create all the typical database applications required in a company. Access 2013 offers the following tools and features, among others:

The most important new features in Publisher 2013

The program for creating professionally designed publications is also an exclusive part of the MS Office 2103 Professional Plus. Publisher offers users extensive design options for all types of catalogues, cards, flyers, newsletters etc., which can be saved ready for printing.

The most important new features in Lync 2013

Lync is an indispensable communication tool for efficient joint work on projects. With just one click, video conferences can be held or IP telephony used. Some of the most important new features are:

InfoPath 2013 makes it easy to create meaningful code-based forms for SharePoint Server 2013, and when used in conjunction with InfoPath Forms Services, the tool also provides many features for developers. Some of the new features include the following:

The most important new features in SharePoint 2013

OneNote, the program for effortlessly creating and using notes, is even more practical with the new Touch App. Tablet users can capture their ideas without using a mouse or keyboard and instantly insert them into an Office. OneNote recognizes handwriting and converts it to printed text.

System requirements for Microsoft Office 2013 in Professional Plus Edition

The Office 2013 Professional Plus is available for download in two versions: 32-bit and 64-bit. As a result, individual hardware requirements - such as those for memory - may differ. The following minimum requirements apply:

Normally only available for volume license customers, you will find the Professional Plus of the Office 2013 version in the Wiresoft Software Shop also as single user license - with the following programs:

When you purchase the Professional Plus of Office 2013 from Wiresoft, you benefit from all these advantages in addition to the option of purchasing it as used software in the form of a single-user license - and at a fabulously low price: