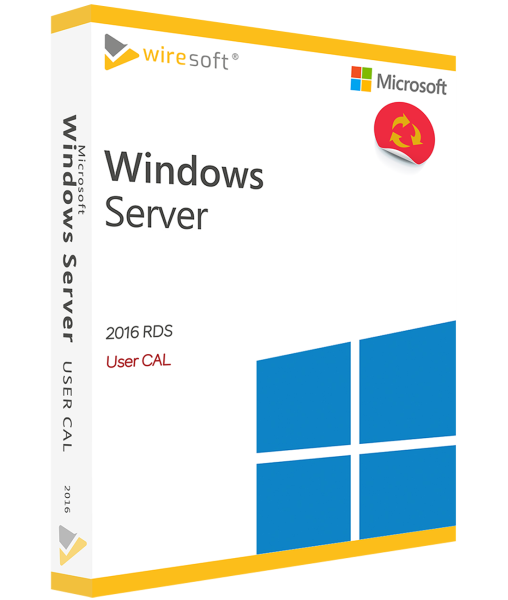 Touse Remote Desktop Services from Windows Server 2016 each user needs a RDS Client Access License (short: RDS User CAL) to access Windows programs etc. in a corporate network locally independent from any end device. The ordinary User CAL for Windows Server does not cover Remote access rights; these must be purchased separately in the form of a Remote Desktop Services User CAL . This gives a single registered User permission for remote desktop sessions.

To be able to use the REMOTE DESKTOP SERVICES of Windows Server 2016, every user needs a RDS Client Access License (short: RDS User CAL), so that he can access Windows programs etc. in a company network locally independent of any end device. The ordinary User CAL for Windows Server does not cover remote access rights, these must be purchased separately in the form of a Remote Desktop Services User CAL. This gives a single, registered user permission for remote desktop sessions.

As used software, Wiresoft's RDS User 2016 CALs have the great advantage of a lower price compared to RDS User CALs from many other license providers. At the same time, they contain the same functionalities as the User Client Access Licenses available through the official Microsoft Volume Licensing Program for REMOTE DESKTOP SERVICES of a Windows server.

What are the benefits of RDS User CALs for Windows Server 2016?

The REMOTE DESKTOP SERVICES for Windows Server - formerly called Terminal Services - represent a dedicated server role towards users or even end devices to be able to use the services of a Windows Server 2016 or another server version without having the used Windows programs installed locally on a computer. User CALs for RDS 2016 regulate this remote access for individual employees; via the corresponding Windows server, which acts as a host, the programs are made available to a licensed user during a remote desktop session. This user can then use any PC or laptop etc. to access them locally independently (remotely) or also at the company location via an Internet connection using his client access license - the RDS User CAL.

Every authorized user who has an RDS User CAL for Windows Server 2016 can thus access a standardized Windows working environment with any Internet-capable end device within the scope of a remote session. As already mentioned, the Windows programs are executed on the corresponding server as host during the remote desktop session; the user is only shown his own session, as this takes place separately from other client connections.

With an RDS User CAL 2016, users can use almost any older end device, even if its performance is lower, as the REMOTE DESKTOP SERVICES provides them with the current performance of the Windows server; with the Remote Desktop Service User CALs 2016, the provision of more powerful hardware is therefore not a mandatory requirement in order to use Windows programs in current versions.

In addition to the practical advantages of RDS User CALs for users or end devices, the RDS CAL system also offers advantages for administrators: The licensing of remote access rights makes the administration of all registered users and PCs more efficient, because in a corporate network the implemented Windows software can be centrally administered and also provided via this, it does not have to be installed on each individual end device for this. The Windows server alone hosts it and the updating with updates also takes place on it.

The RDS User CALs also define the individual rights for the registered users, so that they can only use the Windows server with their own access rights. RDS User and Device CALs for Windows Server 2016 therefore also significantly reduce the effort required for maintenance and provisioning of workstations.

Both the provision and the use of the RDS for User CALs on a Windows server are governed by different roles. First of all, the compatibility of the RDS CAL and server version must be ensured.

Overview of the server roles of Windows REMOTE DESKTOP SERVICES

When using the RDS of Windows Server 2016, in addition to managing the usage rights for users, other server roles are defined that collectively govern the usage of the Windows programs, etc. for a licensed user or endpoint:

Basically, as described above: The implementation of Microsoft Server software 2016 or any other version is independent of its further use - both directly and for the REMOTE DESKTOP SERVICES; for this, a corresponding Client Access License - RDS User CAL or RDS Device CAL - is required. All access rights via Client Access Licences for the use of a Windows server are regulated by Microsoft with its own licensing system.

In order to be able to access the Windows server and its REMOTE DESKTOP SERVICES locally and independently - remotely - via the web, further RDS User or Device CALs are required in addition to the conventional access licences. The Microsoft RDS CAL system also enables server administrators to manage all access rights precisely, which provides greater security because unregistered users without such an access license (RDS User CAL) or end devices have no access to a Windows server.

Microsoft offers two different types of CALs for the use of the REMOTE DESKTOP SERVICES of Windows servers:

The RDS User CAL for Windows Server is always registered exclusively in the name of a single dedicated user. The access license grants this user the right to access a Windows server for a remote desktop session; the choice of end device or client computer used for access is free, but only one PC or similar can be accessed at a time. Due to the free choice of hardware, the authorized user can switch between the desktop PC at the company location, a mobile phone or tablet etc. on the road or e.g. on the laptop at homeOffice, because with the RDS User CAL he always uses his personal account for the Windows server.

With RDS User CALs, no remote desktop licensing is enforced. This means that the respective client connection is established regardless of the number of User CALs for REMOTE DESKTOP SERVICES provided on the license server. However, a valid User CAL must be available for each user. The exact number of User CALs in a company must therefore be defined and a sufficient number of access licenses must be installed on the Windows server so that an RDS CAL is available to each user. This is done by the

Which type of Remote Desktops Services CALs for Windows Server 2016 offers more advantages in a company thus varies from case to case. The decision for client access licensing depends on the number of employees as well as on the primary use of the end devices: Employees who flexibly use various end devices not only internally, but also externally as well as mobile and access them at different workstations, and access the Windows server, have more options with an RDS User CAL. An RDS User CAL cannot be changed into a Device CAL or vice versa. The decision must therefore be made at the time of purchase!

RDS User CALs for Windows Server 2016 are available in the Wiresoft Online Shop starting with a single license - the offer as used software includes a favorable advantage price, without "used" meaning any disadvantages regarding the usability.

What is used software from RDS User CALs for Windows Server 2016?

The REMOTE DESKTOP SERVICES User CALs for Windows Server 2016 offered in the Wiresoft Online Shop are typical Microsoft access licenses from its licensing program; they are part of a volume license for end devices that was initially purchased by a company. The user access licenses not required by the company or the entire volume license were sold to Wiresoft and the volume license was split into individual RDS licenses. With the purchase as well as the splitting these CALs are then marked as used software. However, this does not imply a general wear and tear of the RDS User CAL functions nor any other restriction regarding their usability, including the time limit.

For customers, buying used RDS CALs from Wiresoft is not only affordable, but also secure! You get the Single User CAL for REMOTE DESKTOP SERVICES of Microsoft Windows Server 2016 is not for less money compared to comparable new goods, but also have buyer security through the instant download including license activation with the included valid volume license key.

All User CALs offered by Wiresoft REMOTE DESKTOP SERVICES User CALs for Windows Server 2016 come from the license inventory of companies. For you as a customer, the purchase of a User CAL for RDS or another Microsoft client access license as used software, as well as the use, therefore contains a legal security, because no valid regulations are violated. This has also been clearly confirmed again and again by various court rulings. By the complete proof of the buyers used software of Wiresoft is also audit-proof!

Wiresoft's offer of User CALs for the RDS of Windows Server 2016 as well as other client access licenses as used software is not only a cheaper alternative to the usual commercial offers for customers, but also offers a free choice of the number of CALs required to license the remote services for Windows Server.