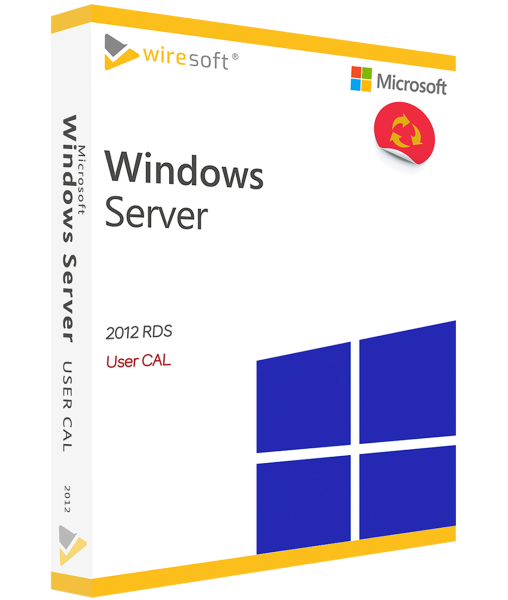 The Microsoft Windows Remote Desktop Services (RDS) are the successor of the old terminal Server CALs . The RDS are a centralized Desktop- and application platform that offers you a wide range of options for delivering and managing desktops and connecting remote workers with session virtualization and Virtual Desktop Infrastructure (VDI) technologies. This allows you to increase flexibility and data security in the enterprise through a centralized desktop solution, while relieving your IT department of the burden of managing desktops and applications.

In order to be able to access Windows Server 2012 or R2 via REMOTE DESKTOP SERVICES, each user requires a separate client access license, the RDS User CAL. It allows to access the Windows programs etc. of a company network from any end device and locally independent. The usual User CAL for Windows Server 2012 does not include extra remote access rights, so these must be purchased additionally in the form of an RDS User CAL.

RDS User CALs version 2012 / R2 from Wiresoft, as used software, have the advantage of a much lower price compared to RDS User CALs from many other license providers, while having the same functionalities as the RDS User client access licenses offered in the official Microsoft volume licensing program for Windows Server.

What are the benefits of the RDS User CALs for Windows Server 2012 or R2?

The REMOTE DESKTOP SERVICES for Windows Server - formerly called Terminal Services - refer to a dedicated server role for users (or endpoints), through which all typical services of Windows Server 2012 can be used without the need for the corresponding Windows programs to be installed locally on a computer. The User CAL for RDS 2012 allows remote access for the respective employee; via the Windows server, which acts as a host, the Windows programs are made available to this CAL-authorised user in the context of a remote desktop session. This user can then use any PC or laptop, etc. - but above all also a thin client - to access them with his RDS User CAL both at the company location and locally independently (remotely) via an Internet connection.

With the RDS User CAL 2012, users can therefore use almost any older Windows-capable end device with lower performance, since the REMOTE DESKTOP SERVICES provides the current performance of the corresponding Windows server; thus, the provision of more powerful hardware is not a mandatory prerequisite for using the Windows server services and the respective programs in current versions.

With a RDS User CAL for Windows Server 2012 or R2, a user can benefit from all the advantages of the corresponding server version; in addition to many important optimizations, especially in virtualization as well as many innovations in Hyper-V, these include:

Advantages of RDS CALs to Windows Server 2012 / R2 for administrators

In addition to the already mentioned advantages of a RDS User CAL for users, a REMOTE DESKTOP SERVICES system also offers certain advantages for administrators: Licensing with RDS User CALs makes the administration of all registered users and PCs more efficient, since in a corporate network the implemented Windows software can be centrally managed and also provided, instead of installing it on each individual end device as usual and also performing updates.

In addition, RDS User CALs also define the individual rights of the registered users, so that they can use the Windows server with their individual access rights. Thus, RDS User CALs for Windows Server 2012 also significantly reduce the effort for the provision and maintenance of workstations.

The provision as well as the use of REMOTE DESKTOP SERVICES via a User CAL is regulated by certain server roles. In addition to the compatibility of RDS CAL and server version, the following conditions must also be taken into account.

Wiresoft offers both the Standard and Datacenter editions for Windows Server 2012 R2. They differ in the different level of virtualization; otherwise, they are the same in terms of the features that the 2012 R2 version offers as such.

The Standard edition of Windows Server 2012 R2 is designed for customers who use either no virtualization at all or only a low level of virtualization, while the Datacenter edition also offers all the necessary features for a virtualized, private cloud environment to run any number of virtual machines in the Hyper-V role.

With an RDS User CAL, the functionality available per edition is then always available.

As described above, the implementation of the Microsoft Server software 2012 or R2 is separate from its further use - the remote usage rights are regulated in the Microsoft licensing system via a corresponding client access license. In addition to the RDS User CAL, there is also an RDS Device CAL. Both CALs are only valid for one user or one specific end device.

The Microsoft RDS CAL system thus allows server administrators to explicitly manage all access rights, which provides greater security because unregistered users cannot access a Windows server without one of the two access licenses. Each RDS CAL type has a certain amount of leeway in the use of the server services.

With the RDS User Client Access License for Windows Server 2012 / R2, only one single dedicated user is ever registered. The RDS CAL grants this user remote access rights to the Windows server in the context of a remote desktop session; this user has a free choice of end device or client computer, with the restriction that only one PC or similar can be accessed at any one time. This means that this authorised user can choose to use, for example, the desktop PC at the company location, a mobile phone or tablet etc. on the road or the laptop at homeOffice, because with the RDS User CAL he always uses his personal account.

With an RDS User CAL, Remote Desktop licensing is not enforced. This means that the respective client connection is then established regardless of the number of User CALs provided on the license server for the REMOTE DESKTOP SERVICES. However, a valid User CAL must be available for each corresponding user. In a company, therefore, the exact number of User CALs must be defined and a corresponding number of User Access Licenses must be installed on the Windows server so that an RDS User CAL is available to these users. This is done via the

Which Remote Desktops Services CAL type for Windows Server 2012 or R2 offers more benefits in an organization and is the more affordable alternative when purchasing used software varies from case to case. This decision is not only based on the number of employees, but also on how they primarily use the existing end devices: As soon as the majority of employees use different end devices or different workstations to access the Windows server flexibly, i.e. not only internally, but also externally as well as mobile, the RDS User CAL offers more leeway.

Before purchasing RDS CALs, you should therefore be clear which type offers more advantages in your company, because an RDS User CAL cannot be changed to a Device CAL. Likewise, it is not possible to change the user at a later date.

The RDS User CALs for Windows Server 2012 or R2 are available in the Wiresoft Online Shop starting with a single license - our CAL offer for used software offers a particularly favorable price without the labeling as "used" resulting in any disadvantages regarding the usability.

What is used software in RDS User CALs for Windows Server 2012?

The User CALs offered in the Wiresoft Online Shop for REMOTE DESKTOP SERVICES for Windows Server 2012 / R2 are typical Microsoft access licenses, as they are also available in the corresponding license program; these are part of a volume license for user client access licenses, which was purchased by a company, which sold individual unneeded access licenses for users or the entire volume license to Wiresoft, RDS volume licenses were thereby dissolved into corresponding individual licenses. With the resale and the splitting into single user CALs, these are marked as used software. However, this does not mean a general wear and tear of the RDS User CAL functionality nor any other restriction regarding their usability, even temporally.

The purchase of used RDS CALs 2012 from Wiresoft is not only inexpensive, but also secure for our customers! Already a Single User CAL for REMOTE DESKTOP SERVICES of Microsoft Windows Server 2012 you get not only at a lower price compared to similar new products, but you also have the buyer's security through the immediate download including license activation with the valid volume license key.

All REMOTE DESKTOP SERVICES User CALs for Windows Server 2012 and R2 offered by Wiresoft in the shop originate from company license inventories. For you as a customer, legal security is therefore ensured both when purchasing a User CAL for RDS or another Microsoft client access license as used software and when using it, because no valid regulations are violated in the process. This fact has been clearly confirmed again and again by various court rulings. Due to the complete proof of all buyers/sellers, used software from Wiresoft is also audit-proof!

The Wiresoft offer of used User CALs for RDS of Windows Server 2012 and R2 as well as for other client access licenses is not only a cheaper alternative for our customers compared to the commercial offers, but offers instead of rigid license scales the unrestricted choice of the number of CALs needed to license the remote services for Windows Server. This allows for customized and therefore cost-effective licensing.

The range of RDS CALs in Wiresoft's online shop includes not only the corresponding RDS Device CAL but also older or newer versions of remote client access licenses for Windows Server. This way you avoid compatibility problems or the purchase of new hardware. Benefit from the wide range of used software for different RDS-CAL versions for Windows Server at Wiresoft!