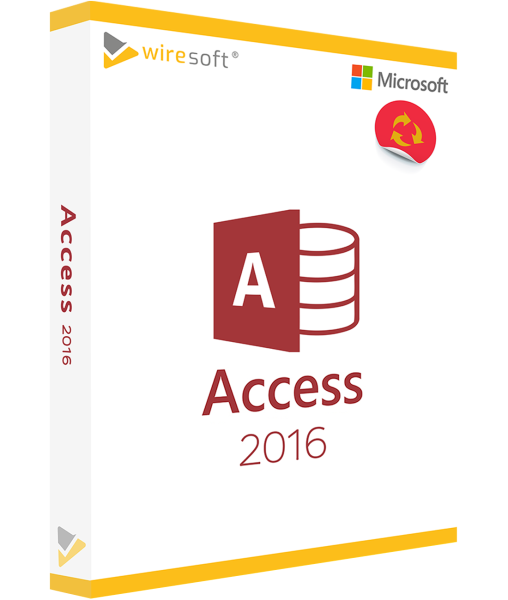 Microsoft Access 2016 is a newer version of the powerful database management system from , with which databases can be created and used individually according to the respective requirements. The interfaces allow not only the import of -, XML-, dBASE files, but also of PDFs, which can thus be used as data sources, as well as of data from SQL databases. Microsoft Access Excel Access 2016 can be used by private users as well as by -users commercially due to the intuitively usable tools. The numerous templates make it possible to quickly create functional databases for project management, administration and goods management in companies. 2016 also makes it easier for non-savvy to develop database-based applications (apps) for mobile devices in order to make these databases easily and quickly accessible to other employees via the intelligent connection. Business Microsoft Access User SharePoint

MS Access 2016 as single program in the purchase version

Microsoft Access 2016 is a newer version of Microsoft's powerful database management system, which allows databases to be created and used individually according to the respective requirements. The Access interfaces allow not only the import of Excel, XML, dBASE files, but also of PDFs, which can be used as data sources, and of data from SQL databases.

Access 2016 can be used commercially by both private users and business users thanks to the intuitive tools. The numerous templates enable the rapid creation of functional databases for project management, administration and goods management in companies. Microsoft Access 2016 also makes it easier for non-experienced users to develop database-based applications (apps) for mobile end devices and to make these databases easily and quickly accessible to other employees via the intelligent SharePoint connection.

Access 2016 comes with a number of technical improvements and additions that further extend the range of possible applications for the database program. For example, Access 2016 supports the BigInt data type, which extends compatibility with Windows SQL Server, and support for dBASE has been reintroduced. In general, the support for working together on documents and making them available in real time has been increased: OneDrive and SharePoint make databases accessible to all users in the cloud.

Access 2016 also offers new Office in terms of visual individualization: Users can now display the program window in dark gray with stronger contrasts instead of the typical dark red - for more focused work.

Access 2016 is usually only available as an integral part of the MS Office Professional (and Office 365). Users of other editions, but also users who do not have an Office version installed at all, can buy the Access 2016 version separately from Wiresoft. This offers the particular advantage that it is also supported by older Microsoft operating systems from Windows 7 onwards - this is of particular benefit to those buyers who continue to use it.

In addition to the 2016 version of MS Access, the Wiresoft online shop also offers you the very latest edition or previous versions of the software - and also the most common other Office- at a particularly favourable price as a single user license. The following overview provides a detailed presentation of the functions and features in Access 2016.

As a relational desktop database (RDBMS - Relational Database Management System) based on the Microsoft Jet Engine, Access offers the great advantage over other comparable systems that the data entered via it can be updated at any time and thus also changed or deleted. This transaction-oriented approach makes MS Access the ideal program for storing current business-relevant data and thus supporting the operative systems in companies. In addition to .ACCDB, Access also uses the older formats .MDB and .MDE as file formats.

Thanks to the integrated development environment, the software, in combination with a graphical user interface, contains many tools for designing targeted applications and making them available to the respective target group in the form of Web Apps via a browser  or as a desktop application.

When creating a new Access database, users can already fall back on a wide selection of templates that take typical application possibilities into account. In addition, databases can of course be configured according to individual ideas and wishes. The tools available for this purpose offer many options for defining specific field data types and field properties. The databases created with Access can be used as apps for local use on the PC, but above all as browser-based applications for use from any location.

When creating reports, Access also offers different views - depending on requirements, users can switch between report view, preview, layout view, and design view to change the focus on the data.

Access 2016 supports users with a whole range of practical functions and features that make working with the program easier and more efficient. Even inexperienced users and beginners will find their way around more quickly: The start screen displays the most recently used databases, which are immediately available with a click. The large menu bar (Ribbon) at the top of the window shows all functional areas in a clear arrangement.

In the Access default setting, the toolbar for access to frequently used functions is located in the upper left corner. The list of commands displayed there can also be customized by the user, which saves repeated searches in the submenu. The toolbar can also be placed below the menu bar to create space. Each tab is divided into functional command groups and actions, such as templates, tables, queries, forms, reports, etc., and then into corresponding context menus with associated context tools.

To simplify or speed up the search for a specific function, the "Tell Me" search wizard is available in the upper menu band. Simply enter search-relevant terms in the input field and "Tell Me" displays the available options. Simple questions are answered directly in this field; for more complex questions or solutions, the wizard suggests additional help that best matches the function you are looking for. Conveniently, the

Search Assistant, all functions that were performed above it: in the submenu, these are listed under "Recently used" and are thus available again more quickly.

Users who want to use Access 2016 on a tablet can switch between mouse and finger input mode by clicking the touch symbol, which also changes the menu band: In fingertip mode, the ribbon offers more space between the individual commands, which makes operation easier.

A query is created in Access 2016 based on the SQL language. There are also various practical tools for this purpose, such as the use of the so-called wild cards * ? # as placeholders for unknown elements of a data record. For queries with more than one condition the two options AND or OR are available.

Action queries can be used to make changes to a table, e.g. to update - for example prices -, to delete or even to create a new table with the selected data records.

If several tables are imported from different sources, Access 2016 also supports the finding and eliminating of redundant data by allowing these tables to be linked together.

The forms that can be used in Access 2016 are a very practical and clear tool for entering and maintaining data and are also suitable for automating processes. The forms have the great advantage over table display that they usually only display a single data record, which can of course also contain tables. The information or data contained in the form is thus displayed in a much clearer and differently structured way, which can make it easier to enter or edit data records manually. With the form layout tools, such AutoForms can be created individually.

In Access 2016 the data type BigInt is introduced, which improves compatibility with MS SQL Server in particular. BigInt can be used to calculate large numbers; this data type stores a non-monetary numeric value in an Access table as a field or when importing from an SQL database. With eight bytes, BigInt has a much larger calculation range (-2^63 to 2^63-1) than the "Number" data type with only four bytes (-2^31 to 2^31-1).

Support for dBASE files and ODBC

In contrast to the previous version, Access 2016 again supports .dbf files, which extends the application possibilities of the database program: dBASE files can thus be imported, exported or linked again. Furthermore, the connection between an Access database and external data sources such as Microsoft SQL Server and Azure is now supported via the Open Database Connectivity Protocol (ODBC).

The possibility of using Access databases also with key combinations extends the circle of users of the program. For users with impaired vision or mobility, the combinations and shortcuts available in the program represent a great relief and often an indispensable alternative to mouse-based work.

The Office Program Access 2016 is offered by Microsoft in two versions: 32-bit and 64-bit. The 64-bit version is installed automatically, but only the 32-bit version can be installed on a 32-bit operating system with an x86 processor. Depending on the version, individual hardware requirements differ - for example, in terms of memory and hard disk space. The following minimum computer requirements apply:

MS Access is a classic component of the MS Office Professional and otherwise not available separately, but only with this Office. In the Wiresoft online shop you can also buy Access 2016 separately - this is a big advantage over many other Microsoft software providers. Another advantage of purchasing software with Wiresoft that should not be underestimated is the unlimited usability of the program: This single license of Access 2016 contains no restrictions and regulations such as the subscription with obligatory updates. Therefore it is even doubly worthwhile to buy Access 2016 from Wiresoft as a single program.

Moreover, buying software with Wiresoft is not only inexpensive but also secure: This Access 2016 single user license offered often comes from a larger volume license as used in companies; therefore, this is so-called used software. However, its functional scope is completely identical to that of the Access software, which is also included in the Office Suite 2016 Professional. By selling it as used software, we offer you Access at a particularly favourable price! You can be absolutely sure, because you do not take any legal risk when buying used software with Wiresoft, as the purchase and sale of used software is expressly permitted by law.

Every Microsoft used software program available through Wiresoft is also checked for perfect usability, therefore the Access 2016 software can be installed on your PC immediately after your purchase and download and used without any restrictions. Wiresoft sells only those full program versions of Access and other Microsoft software that are identical to the original Microsoft versions and come from secure sales sources.

Buying software with Wiresoft is a very economical solution for many users to be able to use otherwise expensive programs - especially for freelancers and SMEs, but also for private users. These users benefit from all the advantages that Access 2016 has to offer and save money at the same time!