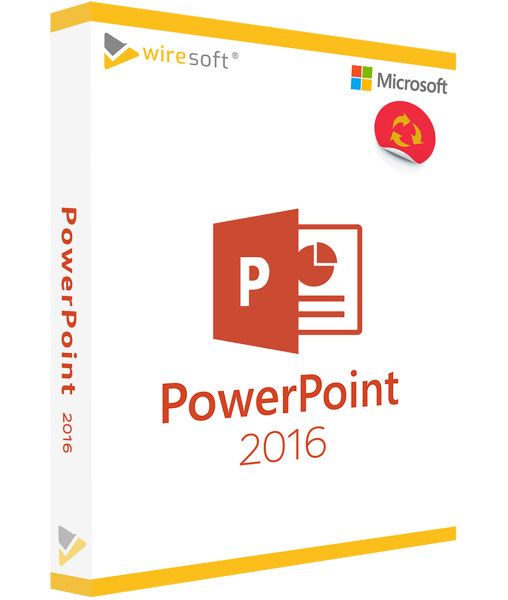 Microsoft PowerPoint is the versatile software program to design convincing presentations and lectures while vividly presenting information. The version PowerPoint 2016 provides another milestone of the proven Office-software to successfully convey content to others in Business, but also in school and study . PowerPoint 2016 supports professionals as well as beginners with many intuitively usable tools to create clearly arranged slides and thus to convey topics in a lively lecture. The user-friendly interface of Microsoft PowerPoint 2016 makes it easy to get started with the program, and a wide range of standardized templates, graphics and programs are available to give each presentation an individual look.

Microsoft PowerPoint 2016 as a Office

Microsoft PowerPoint is the versatile software program for designing convincing presentations and speeches while presenting information in a clear and vivid way. The PowerPoint 2016 version is a further milestone of the proven Office, which can be used in business, but also at school and university.

to successfully convey content to other people. PowerPoint 2016 supports both professionals and beginners with many intuitively usable tools to create clearly laid out slides and thus convey topics in a lively presentation.

The user-friendly interface of Microsoft PowerPoint 2016 allows an uncomplicated introduction to the program. A wide range of standardized templates and graphics as well as programs are available to give each presentation an individual look. The touch-optimized use of PowerPoint 2016 means that it can also be used on tablets; in addition to using the digital pen, some tools can also be operated with the finger.

As the 2016 version of PowerPoint still runs under Windows 7, buyers who wish to continue using this operating system will benefit in particular. Users who also use Microsoft OneDrive can also use PowerPoint 2016 via the cloud services for efficient team collaboration.

The PowerPoint 2016 program is available from Wiresoft not only as an integral part of the corresponding Office, but you can also purchase it separately!

In addition to this PowerPoint 2016 software, the Wiresoft online shop also offers older as well as newer versions as single-user versions at a particularly low price, without a subscription that requires software updates. The following overview contains all interesting features in PowerPoint 2016.

The PowerPoint 2016 version contains many optimizations and enhancements of features from the previous version as well as new tools and graphics, which offer even more possibilities when creating presentations, but also make it easier to collaborate on a document.

New PowerPoint functions in the 2016 version

The new Outlook functions improve, among other things, time management when presenting and

As a typical Office, PowerPoint 2016 also contains a whole range of general new features that generally make the software easier and simpler to use. In particular, the following features and tools support users:

PowerPoint 2016 also includes a new tool that allows users to draw their own mathematical formulas - not only with the mouse or the digital pen, but also with their finger on a touch-optimized surface. All they have to do is use the "Insert New Formula" function to open a separate window in which they write the formula, and PowerPoint immediately converts what they write into text. For further editing, the options Write, Select, Correct and Delete are available.

PowerPoint 2016 is available for download in a 32-bit and a 64-bit version in the Windows by default; as a result, individual hardware requirements may differ.

PowerPoint is a regular component of many Microsoft Office, as such it is usually only available for purchase in conjunction with other Office. At Wiresoft, however, you can also simply buy the PowerPoint version 2016 separately as a stand-alone program - in contrast to most conventional Microsoft software providers.

Your special advantage when buying with Wiresoft: This single user license of PowerPoint 2016 is a purchase version, which neither obliges you to a long-term and therefore expensive subscription, nor to obligatory updates or time restrictions on use. Therefore, buying the software from us is doubly worthwhile, especially if you do not want to use other Office of this suite.

Buying software with Wiresoft is safe: The PowerPoint 2016 single user license, which you purchase in our shop, was usually part of a larger volume license, as used by companies, and therefore a so-called used software - hence our favourable price! Nevertheless, this used PowerPoint software license is completely identical in its functional scope to the PowerPoint 2016 program, which is also included in the corresponding Office Suite 2016.

In addition, every Microsoft program that comes out of a volume license has been tested by Wiresoft for its flawless, unlimited usability, so that PowerPoint 2016 is 100% usable by you after your purchase and download.

Wiresoft offers only full versions of Microsoft programs, which are identical with the editions available from Microsoft. Not only private users, but also self-employed persons and smaller companies, for whom the purchase of a volume license is not worthwhile, thus benefit from all advantages of PowerPoint 2016 and save money.

Apart from PowerPoint 2016, you can buy newer and older versions of it, other MS Office and other Microsoft programs separately in the Wiresoft Software Shop.

If you have any questions about PowerPoint 2016 or any other MS Office, it is best to use our competent advice by e-mail, telephone and chat.