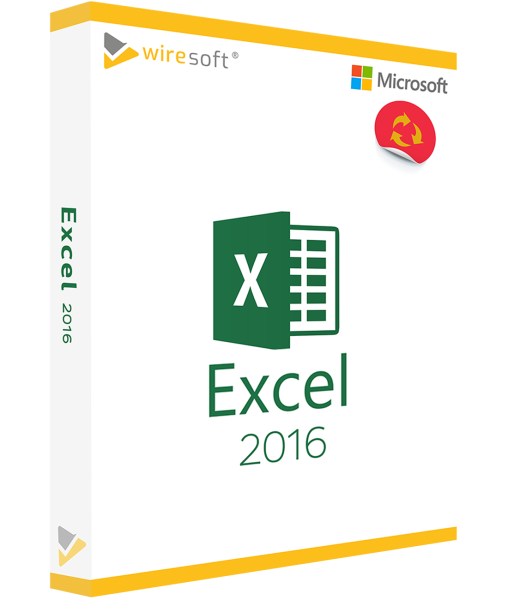 Excel 2016, the classic program for the creation of complex calculations, offers again in the current version a lot of functions and tools to facilitate the daily work with numbers and tables and to be able to perform even complex calculations. New features include One-Click Forecasting for determining and displaying trends, an enhanced Power Query for including data sources such as SAP Objects, Hadoop or Salesforce, and improved PowerPivot functions for analyzing data even faster. Microsoft Business

Excel 2016, the classic Microsoft program for creating complex calculations, once again offers in the current version a wealth of functions and tools to make daily work with figures and tables easier and to perform complex calculations. New features include One-Click Forecasting for determining and displaying trends, an enhanced Power Query for incorporating data sources such as SAP Business Objects, Hadoop, and Salesforce, and improved PowerPivot functions for faster data analysis.

Excel 2016 is also optimized for collaborative document collaboration and real-time document delivery. By integrating OneDrive and SharePoint, users can work on Excel files together in the cloud, whether in the office, at home or on the road: with a click, they are immediately transferred to the cloud, including individual sharing or usage rights, to protect sensitive data even on the network.

To this end, intelligent wizards such as "Insights", which links Excel with Microsoft Bing search, and "Tell Me", which helps users select suitable functions for editing documents, make working with Excel 2016 even easier.

The improved touch operation also makes it much easier to use Excel on corresponding end devices.

Microsoft Excel 2016 is available outside the Office as a low-priced single license in the Wiresoft Software Shop. The following overview shows you what this proven calculation software offers a user when purchasing it.

Excel 2016 contains among others the following extensions of existing functions as well as completely new tools:

In addition, these formulas are also available in Excel 2016:

In Excel 2016, six new chart types integrated into Office are now available to illustrate different calculations. These are the following charts:

The "Recommended Charts" feature included in Excel 2016 provides support in selecting the most suitable chart type for a calculation. To use this feature, simply select the relevant data with the mouse and you will receive a selection of matching suggestions as a live preview with real data.

Excel 2016 also includes a number of other handy tools and wizards that are also available in other programs in the Office 2016 Office to help users work efficiently across all applications.

The Insights wizard is available directly in Excel 2016 to help users find an explanation or additional information about the terms or information contained in a table. Instead of switching to the Internet to search for matching search results, all they have to do is select a particular expression with the mouse - a click activates the Bing-based Intelligent Search directly in Excel and "Insights" displays the search results on the side of the Excel window.

This wizard - in English: "You wish" - in the Excel menu band supports especially users without any previous knowledge in executing functions. Recognizable by the icon in form of a light bulb, it facilitates the use of Excel 2016: the assistant offers a search field that can be activated by simply typing in one or more terms that indicate what the user wants to do in an Excel document. "Tell Me" shows where the corresponding function is located in the menu bar and offers further assistance to perform the action in question, if necessary. This makes Excel easier to use, especially for beginners.

Freehand formula input is a feature that is particularly useful for Excel 2016, allowing mathematical formulas to be inserted directly into a document. Using the mouse or touch input, they are first created freehand and then directly embedded as text in a workbook.

Excel spreadsheets and can be shared even faster and easier with other users in the 2016 version of Excel: The "Share" function contained in the menu bar offers a number of options for the respective document: With a click, the individual addressees can be determined and individual rights can be assigned: for reading or editing, etc.

Due to the possibility of working together on an Excel document simultaneously - as is often the case in the cloud, for example - it is often difficult to keep track of which participant is currently making which changes and when. For this purpose, the "Version History" function provides the version history for each document, in which older editing states are not only displayed, but also made available again for renewed editing.

OneDrive, Microsoft's versatile cloud storage for web-based file sharing, can now also be used in Excel 2016. With the integration of OneDrive, users can store Excel documents there so that they are now accessible from anywhere and on any device. OneDrive also enables local independent collaboration on Excel files.

By integrating Microsoft Data Loss Protection (DLP), its features can also be used in Excel documents to prevent data loss and protect sensitive data. Administrators use DLP in particular to set policies for the creation and release of content that contains sensitive information, so that when a potential security risk is identified, users are alerted or prevented from sharing. DLP services are available in Excel 2016 through SharePoint Online and OneDrive for Business.

Like the corresponding Office, MS Excel is available in a 32-bit and a 64-bit version; individual hardware requirements, such as for memory, may differ:

When you buy Excel 2016, you benefit from all these advantages in addition to the fabulously low price of Used Software with Wiresoft: MS Excel is always part of a Microsoft Office, so it is usually not readily available as a stand-alone program. However, you can buy Excel 2016 as well as other program versions from Wiresoft in the online shop as a single Office - in contrast to many other suppliers, where Microsoft software is only available in the official purchase versions as part of a suite.

The Excel Version 2016 offered by Wiresoft is a purchase license, where you neither have a subscription obligation, which obliges you to download expensive updates, nor do you have to consider a time limit for the usage period. Therefore, when you purchase Excel 2016 as a single software program, you will profit in the long run also in the future. Thus, the purchase of this Excel 2016 single user license is a cheap and economic solution especially for those user groups who want to use all advantages of the proven spreadsheet software but do not need another Office. Especially freelancers and smaller companies, but also private users benefit from our software offer.

The Excel 2016 Single User License offered for purchase at Wiresoft is identical with the Excel software, which is included in the corresponding 2016 Office Suite from Microsoft. Not only Excel 2016, but also all other software licenses offered in the Wiresoft software shop are exclusively original Microsoft products. The individual Office can be purchased here as single user full version. These were usually already used by a previous owner, or originate from larger volume licenses of a company. Any previous installation of such a previously used program or the corresponding license was deleted when the program was sold to Wiresoft, so that Excel 2016 or a corresponding other Office is 100% usable again and can be reinstalled without further ado.

Thus, you will not suffer any disadvantages with regard to the rights of use or their usability when purchasing such from Used Software. Because the purchase of such software products from Wiresoft is completely legal, after payment has been made, you can download them immediately and use them without restriction. For your security, every Excel license has been checked by Wiresoft beforehand for its actual usability. As a serious software dealer, Wiresoft also does not offer any software which can only be used for a limited period of time, or such test versions which can only be used to a limited extent in their range of functions, or which contain licenses which are also used by third parties.

If you have any questions about Excel 2016 or about the purchase of another MS Office software, you can benefit from our competent advice by e-mail, telephone and also in the chat.