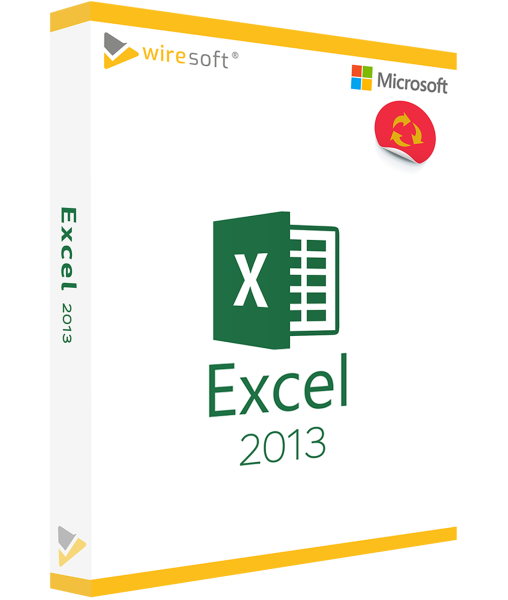 The proven and powerful spreadsheet program Microsoft Excel 2013 convinces in the current version with its numerous new and practical features, which raise the analysis of data to a new level. Business-Users, as well as students and pupils, will benefit from the powerful functions for processing data, as well as from the many options for presenting it informatively according to various aspects. The intuitive and user-friendly interface of Microsoft Excel 2013 allows even inexperienced users to quickly and easily get started with the program.

The current version of the proven and powerful spreadsheet program Microsoft Excel 2013 impresses with its numerous new and practical features that take data analysis to a new level. Business users, but also students and pupils benefit from the powerful functions for processing data, as well as from the many possibilities for presenting them in an informative way according to various aspects. The intuitive and user-friendly interface of Microsoft Excel 2013 allows even inexperienced users to get started quickly and easily.

One of the highlights of Excel 2013 is above all the flash preview feature: it automatically recognizes patterns in tables and makes suggestions for automatic additions. In addition, Microsoft Excel 2013 not only offers the new Strict Open XML file format with the .xlsx extension, but also a compatibility mode to ensure the use of older Excel documents.

From a technical point of view, the Excel 2013 version has the advantage that it still runs on Windows 7 or Windows Server 2008. This means that the software can also be used on older computers - an advantage especially for private users and the self-employed, but also for smaller companies looking for an economical solution to cover their software needs.

Excel 2013 also offers the option of using Microsoft SkyDrive to save Excel worksheets and sheets online, so that they are also available in the cloud and can be shared with other users via SharePoint and also edited by them.

Excel 2103 is available from Wiresoft at a favourable price as a single program in the purchase version. The following overview presents the most important features and extensions of Excel 2013.

Excel 2013 - Presentation of the most important new features

The 2013 Standard version of the proven spreadsheet software has new tools that support users even better in processing and analyzing large amounts of data. For example, Excel 2013 recognizes patterns while editing data sets, suggests suitable charts and provides tools for direct editing.

Wizards facilitate the use of Excel 2013

Even the basic settings of Excel 2013 are designed in such a way that functions are clearly arranged and, thanks to a number of presets, many configurations can be automatically adopted when creating new worksheets, which saves time when working with the software. Users will find templates for forms and reports, but also for budgets and calendars and others.

The program also recognizes recurring patterns in the processing of data and makes them available automatically, it also provides even more convincing representations of data to facilitate their interpretation from individual points of view, etc:

Above all, however, Excel 2013 offers powerful tools and functions for the efficient processing and use of data:

Excel 2013 also has a new file format called "Strict Open XML Workbook" and the extension .xlsx, in which data can now be opened and saved. Tables formatted with .xlsx have the advantage, among other things, that ISO8601 date values are also read and written, thus the leap year problem for the year 1900 known from previous versions has also been solved.

In addition to the "Recommended Charts" button described above, which suggests charts that are preferred for displaying data based on the current selection of data, Excel 2013 also contains a number of other functions for processing charts. These include three newly integrated chart buttons that make it even easier to change typical elements such as title, label and format:

Use Excel 2013 with online functions

By using the Microsoft online services SkyDrive and SharePoint, Excel 2013 also has some specific web features. This also opens up completely new possibilities for collaboration, for example, by allowing worksheets etc. to be saved and shared online:

The Office software Excel 2013 is available for download in two versions: 32-bit and 64-bit. The 64-bit version is installed automatically, but on a 32-bit operating system with an x86 processor only the 32-bit version can be installed.

Depending on the version selected, individual hardware requirements - for example in terms of RAM - can therefore differ. The following minimum requirements must be observed:

Buy Excel 2013 cheaply from Wiresoft as a single program

In the Wiresoft software shop you can get Excel 2013 as a low-priced purchase version - without subscription obligation. Besides the fabulous price for a used software, which comes from a volume license, you will benefit from all these advantages:

If you have any questions regarding the purchase of Microsoft Excel 2013 or other Microsoft Office, please contact us by e-mail, phone or here in the chat.