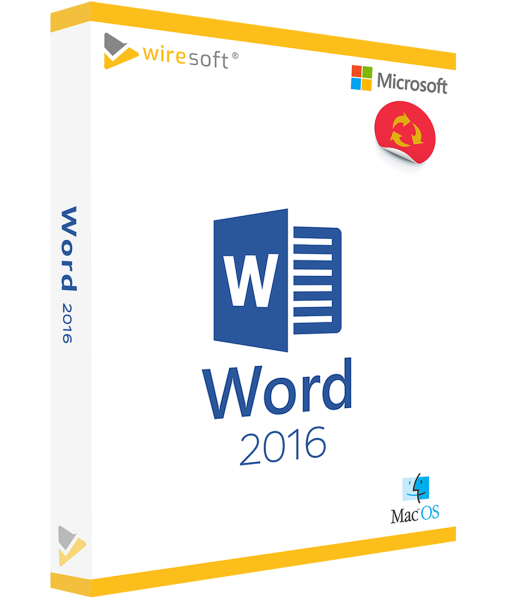 Word is THE classic, unsurpassed word processing program, which is not only appreciated by PC users, but also by Mac users. Its extensive possibilities in the creation as well as editing of texts of any kind leave virtually no wishes unfulfilled. The version   Word for Mac 2016 again contains a large number of tools and features that make it easier for professionals as well as beginners to create documents of all kinds: From reports, contracts and business letters to scientific documentation, from student reports and seminar papers to private written documents - offers suitable templates and formatting options for all text types. In addition, graphic elements such as tables, diagrams and images can be easily inserted. Business Word

Word is THE classic, unsurpassed word processing program that is appreciated not only by PC users, but also by Mac users. Its extensive options for creating and editing texts of all kinds leave almost nothing to be desired.

The Word for Mac 2016 version once again includes a host of tools and features that make it easy for professionals and novices alike to write documents of all kinds: From business reports, contracts and business letters to scientific documentation, from student presentations to seminar papers and private documents - Word offers suitable templates and formatting options for all types of text. Graphic elements such as tables, diagrams and images can also be easily inserted.

Word for Mac 2016 also has a new look: Instead of the many previous template categories, the program now shows the most important four functions in the form of discreet icons instead of seven views: "New", "Recently used" and "Open" as well as "Account" for the Microsoft Cloud services, some of which are also available to Mac users.

While the styles were previously displayed in floating windows, the 2016 version of Microsoft Word for Mac now displays them in the document window in the sidebar on the right side of the screen. Another particularly practical feature is that a larger Word document can be opened in two windows at the same time, allowing a user to keep an eye on a particular text passage while editing it and make changes if necessary.

Word 2016 for Mac is optimized for collaborative, simultaneous work on a text document in a team. The Microsoft cloud service OneDrive, which can also be used by Mac users, makes it possible to make Word files available online in real time. Before uploading, individual release or usage rights can be assigned for each text, in particular to ensure the protection of sensitive data on the network.

Word 2016 for Mac is available in the Wiresoft software shop as a purchase version at a special price, without any further subscription obligations. Below you will find an overview of the most important functions for efficient word processing, which the popular Office offers you at purchase.

Word 2016 for Mac contains many general improvements to existing features as well as a whole range of new functions. Especially in the field functions, the extended input options make it easier to work on documents that contain a lot of variable data. These can be automatically updated in Word files. Users are familiar with the simpler typical field information such as page numbers, numbering, and footnotes, but the new field functions also allow more complex automations to be used, such as tables of contents and mathematical calculations with current numbers and others:

Other new individual features in Word for Mac 2016

In addition to the specific new Word features, the 2016 Mac version also includes a number of other handy tools and features, all of which are designed to help Mac users collaborate on a document:

In the context of projects, several users often work simultaneously in the cloud on a Word document. This often makes it difficult to keep track of all changes that have just been made by the other users. The "Version History" feature in Word for Mac 2016 makes tracking easier because it allows a user to view a version history of any Word document. This includes not only the ability to view older editing states, but also to reopen them for further editing.

Word for Mac in the 2016 version makes it even easier to share texts with other users. For this purpose, the ribbon now contains the "Share" function. It contains various options for assigning individual permissions for each Word document and each recipient - in addition to read-only permissions, these include permissions for editing or forwarding, so that sensitive data in a text can be protected.

Using OneDrive in Word 2016 for Mac

OneDrive is Microsoft's cloud storage to share and make Word files available to other users via the web. Mac users can also use the OneDrive synchronization app to store Word documents in OneDrive so that they can be edited or read online on other devices.

Data Loss Protection (DLP) is a well-known and frequently used tool from Microsoft that not only prevents the loss of sensitive data, but also protects it from unauthorized access. DLP can also be used in the Mac version of Word 2016. The integrated content filters can detect critical data such as credit card numbers in a document and then not only alert users to its existence, but also prevent it from being passed on to other users. Administrators, in particular, can effectively use Data Loss Protection to manage user-specific policies for creating and sharing sensitive information that can immediately identify and report potential security risks.

System requirements for Word for Mac 2016

Please refer to the following terms and conditions for the hardware requirements for Word 2016 for Mac: This Word software is only available in the 64-bit version. In addition, the retail version of Word 2016 for Mac cannot be used on an iPhone or with an iOS operating system. Other requirements:

Buy Word 2016 for Mac from Wiresoft also as single program

Word 2016 is normally only offered as a fixed component of an Office for Mac and is therefore hardly available as a stand-alone program in the trade. But at Wiresoft in the software shop you can buy the Mac version of Word 2016 as single user license, as well as older Word program versions and the other programs of an Office suite for Mac. When you buy Word 2016 for Mac, you will benefit from Wiresoft's much lower price for used software as well as from all the following advantages:

The Word 2016 purchase version for Mac is therefore economically advantageous, especially for those user groups who would like to use all the functions of the word processing software but do not have any use for the other Office. Especially self-employed persons and smaller companies, but also private users will appreciate the advantages of the Wiresoft software offer if they want to cover their needs for Microsoft programs for the Mac at a reasonable price.

All Microsoft software licenses for Mac as well as for Windows offered in the Wiresoft software shop are exclusively original Microsoft products, which are usually available as single user full versions. These are either part of a former volume license of a company or were already used by a former user, but were released again when sold to Wiresoft. This means that each older installation of the software program or use of the respective license has been deleted. Every Word license for Mac 2016 or any other Microsoft program offered in the Wiresoft software shop can be downloaded and installed directly after payment and is then 100% usable.

As a reputable software dealer, Wiresoft does not offer test versions of Microsoft programs in its online shop, which can only be used for a limited period of time or whose range of functions can only be used to a limited extent, or software products whose license key is also used by unknown persons.

For you as a buyer, this means that you will not suffer any disadvantages from the purchase and use of a used software such as Word for Mac 2016, neither in terms of rights of use nor in terms of usability. The purchase of used software products from Wiresoft is therefore completely legal and also audit-proof. For your safety, every Word for Mac or other software license has been checked by Wiresoft beforehand to ensure that it is actually usable.

If you have any further questions regarding the purchase of Microsoft Word 2016 for Mac or any other Office software for Mac, please contact us by e-mail, phone or chat and benefit from our competent advice.