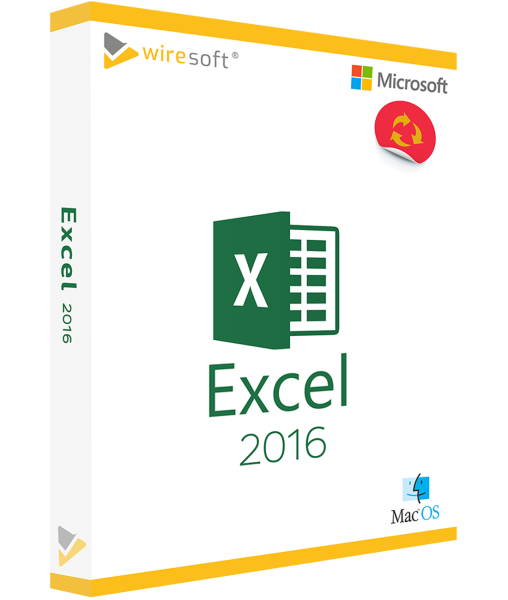 Excel 2016, the classic spreadsheet program for a wide range of arithmetic operations, is also available for the Mac as a standalone program. Although this latest program version does not offer exactly the same range of functions as the corresponding PC version, it has all the features of the previous version 2013 and now also offers full compatibility between the two systems. however, Windows Excel Excel 2016 for Mac still contains a whole range of new functions and tools that make professional work with sets of figures and complex tables even easier. Sales forecasts and other forecasts can now be calculated, pivot tables can be used and pivot charts can be created.

Microsoft Excel for Mac 2016 - the efficient calculation program for macOS

Excel 2016, the classic spreadsheet program for a variety of calculations, is also available for the Mac as a stand-alone program. Although this current version of the program does not offer exactly the same range of functions as the corresponding PC version, it has all the features of the previous Windows version Excel 2013 and now also offers full compatibility between the two systems.

But Excel 2016 for Mac still includes a host of new features and tools that make it even easier to work professionally with numbers and complex tables. Sales forecasts and other forecasts can now be calculated, pivot tables can be used and pivot charts can be created.

Excel 2016 for Mac is also optimised for team collaboration and real-time sharing of spreadsheet documents. Mac users can also use Microsoft's OneDrive service to work on Excel files in the cloud, whether in the office, at home or on the road. With the upload, individual sharing or usage rights can be assigned for each authorized user, ensuring that sensitive data is protected even on the network.

Excel 2016 for Mac is available in the Wiresoft software shop as a low-priced single license. Below you will find an overview of the most important functions that this popular calculation software offers you when you buy it.

Excel 2016 for Mac includes many improvements, especially for pivot tables, as well as the following enhancements to existing features and completely new tools:

While working on an Excel workbook, the contextual tools in particular make it easier: Together with the selection of certain elements, additional commands can be displayed in the ribbon. For example, Mac users can select a chart to display the Design Chart and Format tabs in the ribbon. They can also insert functions by clicking Insert Function on the Formulas tab to display the Formula Builder pane. Here it is not only possible to search for certain functions and insert them by clicking on them, but also to look up the correct syntax. This feature also offers comprehensive help for the selected functions. In addition to these special calculation functions, Excel for Mac 2016 also includes a number of other tools that make working with Excel files easier:

Excel 2016 for Mac also includes a number of additional handy features and tools to help Mac users with many of the tasks that come with Excel workbooks:

The formula entry with the freehand tool offers practical application possibilities especially in Excel 2016 for Mac: Using the mouse or touch input, a mathematical formula can be created freehand and immediately inserted and used in an Excel document.

The 2016 version of Excel for Mac makes it even faster and easier to share Excel sheets with other users. The Share feature is available in the 2016 for Mac ribbon. It offers a number of options for each Excel document: Individual rights can be assigned to each addressee - not only to read, but also to edit, forward, etc.

Use "Version History" for collaboration in Excel 2016

The "Version History" function is also available in Excel for Mac 2016. This gives users a version history of each Excel document. The great advantage of  "Version History" is not only that this tool shows older editing states, but also that these versions can be reopened for further editing. This makes it easier when several users are working simultaneously on an Excel document in the cloud and it is often difficult to keep track of all the actions that are currently being performed by others.

Use OneDrive in Excel 2016 for Mac

OneDrive is a practical cloud storage solution from Microsoft, which allows files to be shared or made available via the web. Users who want to use the OneDrive sync app on their Mac can download it and use it in Excel 2016 for Mac. Excel documents can be stored in OneDrive and made available for online access anywhere and to a variety of devices.

Data Loss Protection (DLP), Microsoft's proven tool for preventing data loss and protecting sensitive data, is also integrated into the Mac version of Excel 2016. The powerful content filters detect sensitive data such as credit card numbers, etc. and alert users to them or prevent their disclosure in an Excel file. As a result, administrators use the DLP in Excel 2016 for Mac primarily to create policies for creating and sharing content that contains sensitive information so that potential security risks are immediately identified and displayed.

System requirements for Excel 2016 for Mac

Buy Excel 2016 for Mac as single program from Wiresoft

Excel is normally an integral part of an Office for Mac and is therefore not offered as a stand-alone program in normal trade. In the Wiresoft software shop you can buy Excel 2016 for Mac as well as earlier program versions and also the other components of the Office Suite for Mac also as single user license. With the purchase of Excel 2016 for Mac from Wiresoft, you profit from all these advantages in addition to the fabulously low price for used software:

The purchase of an Excel 2016 single user license for Mac offers all these advantages especially for those user groups who only want to use all the advantages of this well-proven spreadsheet software and do not need all the other Office. Besides freelancers and private users, smaller companies in particular benefit from the range of programs offered by Wiresoft, if they are looking for an inexpensive and economical solution when buying software.

Not only Excel for Mac 2016, but also all other Mac software licenses that you can buy in the Wiresoft Software Store are original Microsoft products. The Office for Mac are always available as single user full versions. As such, they were either part of a larger volume license of a company or were used by a previous owner and released by selling them to Wiresoft. This also deleted any previous installation of a software program or use of the license. The Excel license for Mac 2016 or any other Office can be downloaded and installed immediately after payment and is 100% usable.

As a serious software dealer, Wiresoft does not offer any program software in the online shop which are test versions with limited functionality or which have a limited period of use.

As a buyer, you will therefore not suffer any disadvantages in terms of usage rights or usability when using used software such as Excel for Mac 2016. Buying such software products from Wiresoft is absolutely legal and therefore audit-proof. In addition, every Excel or other software license has been checked by Wiresoft beforehand to ensure its usability.

If you have any questions about Excel 2016 for Mac or about the purchase of another Office software for Mac, please contact us via e-mail, phone or chat and benefit from our competent advice.