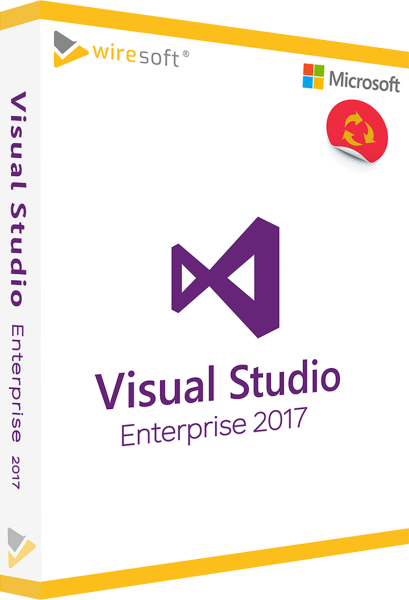 The Enterprise edition of Visual Studio 2017 provides users with a wide range of powerful features to develop apps for any domain on popular operating systems, while the integrated tools make every step from development to release even more efficient: Only available in the Visual Studio 2017 Enterprise  edition is the Live Unit Testing feature for C# and Visual Basic to draw attention to errors as they are written, as well as the IntelliTrace function, which can be used to create snapshots and switch between the states of an application - in addition, this edition in particular also supports collaborative work in larger teams.

The Enterprise Edition of Visual Studio 2017 provides users with a wide range of powerful features to develop apps for every area on the most popular operating systems, while the integrated tools make every step from development to release even more efficient: Available only in the Visual Studio 2017 Enterprise Edition are Live Unit Testing for C# and Visual Basic, which allows users to identify bugs as they are being written, and IntelliTrace, which allows users to take snapshots and switch between states of an application, as well as the ability to work together in larger teams.

Visual Studio 2017 Enterprise offers developers a wide range of languages, from C and C++ and C# to iOS, JavaScript, Python, ASP.NET, and more, including live support for writing code: The practical functions not only make it easier to navigate during analysis and debugging, but also to make corrections and overwriting during debugging and refactoring - IntelliSense is just one example, as is CodeLens, which displays changes to the code directly in the editor.

Who is the Visual Studio 2017 Enterprise Edition for?

The Visual Studio 2017 Enterprise Edition is designed for professional developers who want to collaborate with others to develop applications for the desktop, mobile, and the Web and take advantage of its extensive code analysis and refactoring capabilities. Visual Studio 2017 has the advantage that it also supports Windows 7. Thanks to its space-saving installation, the software can also be used on older devices, which expands the range of applications.

The Enterprise Edition of Visual Studio 2017 is designed for developers with higher-level needs that require effective testing and debugging capabilities, including

Early detection and elimination of errors in the code are among the most important standard tasks in programming. Live Unit Testing makes it possible to change or redesign code even more reliably. This feature is available exclusively in the Enterprise Edition for projects in C# and Visual Basic based on .NET Core and .NET Framework. Even as a developer changes code, Live Unit Testing automatically runs unit tests in real time to determine whether they adequately cover the code, and to ensure that possible changes do not cause regression. Live Unit Testing's code coverage is displayed graphically in real time, so users can immediately see if and how many lines of code are covered by the tests, and the 2017 edition includes the following enhancements and optimizations:

IntelliTrace is specifically designed for C#, C++, and Visual Basic languages to save time capturing and tracking code execution history. Among other things, this allows

Especially the step-back debugging, which was only available for C# in the previous version, is now also available for C++. With the "Events" and "Snapshots" functions, developers can immediately switch back and forth between different states of an application (prerequisite for this is the Windows 10 Anniversary Update (1607)).

Users can create snapshots and use "Step back" and "Step forward" to navigate through the events displayed in the Events tab of the Diagnostic Tool window. When navigating, progression-based debugging is automatically enabled for a selected event.

Overview of other important features in Visual Studio 2017 Enterprise

The 2017 version of Visual Studio Enterprise includes several improvements over the previous version, as well as new features to make the development process faster and more efficient. Admins can decide at the installation stage which applications are preferred: for example, only the Core Editor can be used, or .NET desktop applications, Python, etc. Furthermore

accelerates boot times when starting the program, starting sessions and loading solutions, as well as the recognition of templates for projects and elements.

A highlight of Visual Studio Enterprise 2017 is the extremely wide range of supported languages: In addition to older languages such as Visual Basic and C, C++, C#, TypeScript and Python for rapid application development, the web languages HTML and CSS are also available, as well as ASP.NET Core for creating web applications and services and mobile back ends, ASP.NET Razor, Java and JavaScript, but also F#, PHP and Objective-C for app development for iOS, etc.

In addition, Visual Studio 2017 also contains improvements to the editors for C++, C#, Visual Basic, F#, JavaScript and TypeScript, in addition to optimizations of the code debugging and problem diagnosis tools for software development with .NET Core, ASP .NET Core, but also Unity and MS SQL Server, among others.

With the integration of Xamarin, the development of mobile apps for Windows, Android and iOS on this basis is now possible in Visual Studio 2017. Typical Xamarin features include the Xamarin Forms Previewer, which provides a live preview of the effects of a line of code on an application. Also included are Xamarin.Forms, Xamarin Profiler and Xamarin Test Recorder features, as well as IntelliSense for XAML enhancements to Xamarin Forms.

The IntelliSense feature describes APIs as soon as they are entered and automatically completes them using the built-in IntelliSense completion lists, which speeds up the corresponding processes. Tooltips indicate problems by marking critical locations with a wavy line. The lists also provide quick access to members, namespaces and code snippets, as well as variable, command and function names. Specifically in C#, the completion lists include tokens for "List Member" and "Complete Word".

The CodeLens function offers developers the time-saving option of navigating to individual functions without having to leave the code. CodeLens also marks all code changes in the editor and shows whether a test has been passed at the relevant point, as well as the last developer who made changes there.

Refactorings offer the practical possibility to update or improve the internal structure of code without changing its behavior. Additional refactorings are available in Visual Studio 2017 Enterprise; these include converting If statements to Switch statements, adding parameters, such as NULL checks, and arguments, as well as generating overrides; inserting number separators for literals - especially numeric literals, changing the base from "hexadecimal" to "binary" - and so on.

If you don't want to use Microsoft's own Azure DevOps solution in Visual Studio 2017 Enterprise to manage source code, you can use Git for the remote repository instead. Git is the widely used Standard for version management of files and also allows members of a larger team to work on a project simultaneously.

The Visual Studio 2017 Edition now allows Git to directly access these repositories through integrated buttons in the IDE for setting up, editing, and publishing code. It also includes new additions such as push and commit features, and SSH support. When using Azure DevOps Services, Visual Studio Enterprise also connects users to Git or GitHub repositories and TFVC repositories via Team Explorer.

One of the following Windows versions is required to run Microsoft Visual Studio 2017 Enterprise:

The Microsoft Visual Studio 2017 Enterprise Edition is offered in the online shop of Wiresoft as a single license in the purchase version - and is available as used software at a particularly favourable price, it is therefore not the standard subscription version. This license of Visual Studio 2017 Enterprise Edition originates from a corresponding volume license of a company purchased from Wiresoft, which was dissolved and converted into single licenses, thereby giving them a new designation as "Used Software".

Buying software with Wiresoft is always inexpensive and safe at the same time! The license of Visual Studio 2017 Enterprise offered by Wiresoft in the shop does not have a big price advantage compared to the other subscription obligations due to the one-time purchase, but can be used immediately due to the immediate download and the license activation with the included valid volume license key. In addition, the purchase of a used software such as Visual Studio 2017 Enterprise or any other Microsoft software is also legally secure for Wiresoft customers: trading with used software is expressly permitted by law, which has also been clearly confirmed by corresponding court rulings, so Wiresoft software is also audit-proof.

For all these reasons, single licenses of used software such as Visual Studio 2017 Enterprise are a cost-effective alternative to conventional offers of software licenses for buyers, and thus offer an economic possibility to use such exclusive program editions.

In the Wiresoft software shop you will find not only this Visual Studio 2017 Enterprise Edition, but also further versions and editions of this software as well as matching Microsoft operating systems like Windows 8 and Windows 10 - always as used software with immediate download. If you have questions about Visual Studio 2017 Enterprise or any other Microsoft program, simply use our competent advice in the chat or by e-mail or telephone.