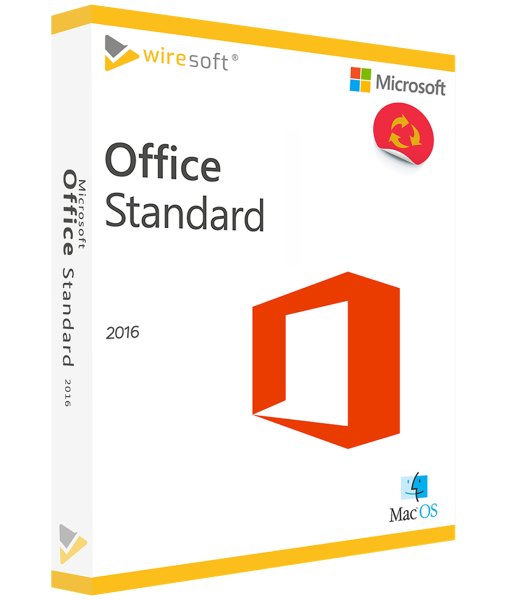 The comprehensive Microsoft software package Office 2016 is also available for the Mac. In the Standard-Edition it contains the proven programs Word, Excel, PowerPoint, Outlook as well as OneNote. In the Mac version MS Office 2016 offers a thorough revision of the previous components, with an optimized adaptation to OS X, while retaining the typical user interface known from Windows with its typical layout. User can thus write texts, create calculations, design presentations as well as manage e-mails and process notes as usual, without having to do without the familiar features of the Mac system. Also in Microsoft Office 2016 for Mac the keyboard shortcuts known from the Windows version have been adopted, which is a relief especially for those users who switch between the two operating systems.

Microsoft Office 2016 for Mac - the efficient office and business software

The comprehensive Microsoft software package Office 2016 is also available for the Mac. The Standard contains the proven programs Word, Excel, PowerPoint, Outlook and OneNote. In the Mac version, MS Office 2016 offers a thorough revision of the previous components, with optimized adaptation to OS X, while retaining the typical Windows user interface with its typical layout. Users can write texts, create calculations, design presentations, manage e-mails and process notes as usual, without having to forego the familiar features of the Mac system. Microsoft Office 2016 for Mac also includes the key combinations familiar from the Windows version, which makes life easier for users switching between the two operating systems.

In particular, Office 2016 Mac optimizes cross-platform compatibility between documents created in Windows and those created in OS X by providing greater consistency of presentation. This is especially beneficial for collaboration and document sharing, not only between Windows and Mac users, but also in the cloud - where Office prefers to offer the Microsoft Cloud OneDrive.

However, the Mac version of MS Office 2016 Standard differs from the Windows version in a few points: The Microsoft Publisher and Microsoft Access applications are not included in Office for Mac 2016; also missing are the two new functions "Intelligent Search" - "Insights" - and "What do you want to do? - "Tell Me" - and the new chart types added in Word, Excel and PowerPoint.

But even in the applications available in Office for Mac 2016, there are still many convenient enhancements and exciting new features to help you get the job done.

New features in each application in Office 2016 for Mac

Many new features in Office 2016 for Mac are also available across applications in the three individual applications Excel, Word, and PowerPoint to support cross-application work on documents.

To share documents even more easily, users simply click on the "Share" button in the menu bar. Reading and editing rights can also be assigned individually.

When working on a document together with several colleagues, it is important that the older versions of the document remain available. Using the "Version History" function, these versions can not only be displayed immediately, but the corresponding states can also be restored for further use.

OneDrive's integration with Office 2016 for Mac means that Mac users can now access an Office stored on OneDrive from any device, regardless of location. This eliminates the need to store them locally on a PC or similar or USB stick as before.

OneDrive also makes the DLP feature in Office 2016 for Mac available for Word, Excel and PowerPoint documents. In particular, administrators can use DLP to centrally create and manage policies that set policies and notices for data security when creating and sharing documents with other users and display them when the app detects a potential risk.

In addition to these new features that are available in Word, Excel, and PowerPoint, Office 2016 for Mac includes several new features and improvements for the other individual applications available in the Standard:

The following functions in particular facilitate the joint work of several users on a Word document:

Excel 2016 for Mac includes the following enhancements to existing features as well as new tools:

Mac users who like to use Outlook to organize email and appointments will appreciate the following new features that not only sort the daily flood of email, but also make finding content and documents much easier.

The new Outlook features in Office Standard for Mac include practical ways to improve time management during a presentation and to highlight content:

OneNote - the notebook from Office, makes jotting down, editing and sharing important ideas with others even more convenient:

At Wiresoft you can find the Standard Office 2016 for Mac - with the integrated applications:

When you purchase the Standard of Office 2016 for Mac, Wiresoft offers you the following additional benefits in addition to our low price for used software:

If you have any questions about purchasing Microsoft Office 2016 for Mac Standard or other available Microsoft software products, please contact us by email, phone or chat.