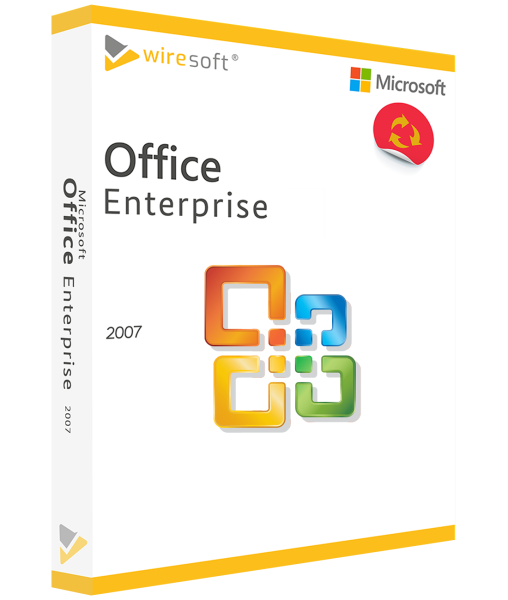 With us you buy cheap Microsoft Office 2007 Enterprise - as download full version ESD!

Here is some information about Microsoft Office 2007 Enterprise as Online-MLK-Download in German and many more languages:

Product information: Microsoft Office 2007 Enterprise has been available since June 2007 and enables continuous productive work on PCs, mobile phones and web browsers. You can buy Microsoft Office 2007 here in the form of a software license at a low price as a volume license. The following applications are included in this software package:

Since the license comes from a volume license, we can offer you the download of the software particularly favorable. You will receive the full version as a single user license including the right of second use. The software package contains the following programs:

Your computer must meet certain requirements in order for you to use the programs without problems. The download process requires a 500 MHz processor, 256 MB of memory, and 2 GB of free hard disk space. To install the software, you must have Microsoft Windows 7, Microsoft Windows Vista, or Microsoft Windows XP SP3 installed.If you have any questions about downloading Microsoft Office 2007 Enterprise, we will be happy to answer them before you purchase. Simply contact a member of our staff by telephone or via our contact form. Also, if you would like to purchase the Microsoft Office software solution but are unsure how to install it, we can help.

Installation on the following operating systems:

Why you should buy Microsoft Office Enterprise 2007 License?

Get the most out of your work, wherever you are. Use this versatile software at work or at home. It doesn't matter if you're using a computer, a phone, or a Web browser. From insightful updates to Excel, PowerPoint, and Word, to a clear view of your e-mail through Outlook, Office 2007 Enterprise keeps you productive. Impress with attractive text with Word, create elaborate calculations with Excel, or impress with engaging presentations with PowerPoint. When you buy Microsoft Office 2007 Enterprise, you discover the possibilities that await you.