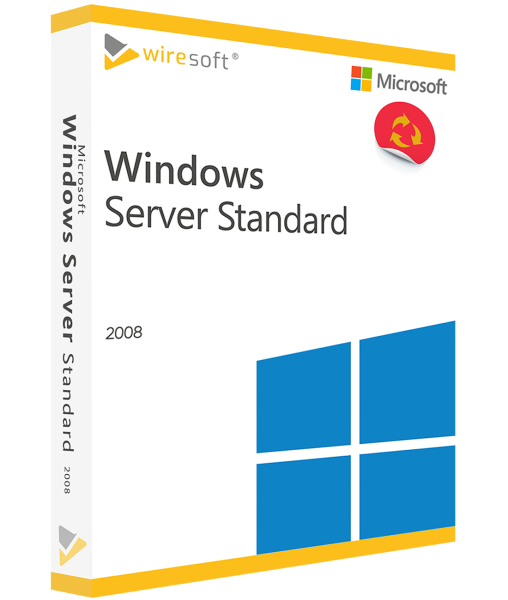 Windows Server 2008 is the immediate successor of the 2003 version of . "Longhorn", as the unofficial name of the system software is called, contains not only numerous improvements compared to its older predecessor, but also new functions that meet the current requirements, also with regard to virtualization. Server Microsoft Business

Windows Server 2008 is the immediate successor of the 2003 Server version from Microsoft. "Longhorn", as the unofficial name of the system software is called, contains not only numerous improvements compared to its older predecessor, but also new functions that meet current business requirements, including virtualization.

Windows Server 2008 provides a reliable basis for setting up a company-owned network that offers secure interfaces to the central server and, of course, integrates many end devices. The graphical user interface makes Windows Server easy to use, even for beginners. In addition, the operating system (OS - Operating System) can be controlled by mouse and keyboard, which eliminates the need to know complex commands.

In addition to Windows Portable Devices, Point of Service for .NET and RemoteApp, the most important features include Hyper-V, which enables the virtualization of entire server systems. PowerShell, which is based on the .NET Framework, is now included by default in Server 2008, and failover clustering has also been improved. Also included is IIS 7.0, the new version of Internet Information Services, including support for PHP, SSL and HTML.

Thus, Windows Server 2008 represents an efficient server operating system whose different editions support the individual requirements of larger as well as smaller companies. The software offers all the prerequisites for administrators and IT experts to optimize the flexibility and reliability of the company's own server infrastructure, while at the same time providing a robust application or web platform on which developers can provide a variety of applications and services.

Microsoft Windows Server 2008 is available in the Standard, Enterprise and Datacenter editions, each with 32-bit and 64-bit architecture, the Standard which is available from Wiresoft at a reasonable price. This edition is especially designed for the use of small and medium-sized companies without having to forego essential functions.

With the functions available in Windows Server 2008 Standard, companies of all sizes in particular have all the important, effective tools at their disposal to build and maintain a robust server operating system in the areas of management, protection and transfer of data. In addition to the integration of Windows Vista, the powerful virtualization tools increase the efficiency of teamwork and offer greater control of company and home networks.

As a result,Windows Server 2008 Standard also includes many new security features that improve the protection of the server and managed data. For example, the built-in firewall in the new Remote Server Management Tools snap-in has a number of revised policies and settings.

Further security tools include the Read only Domain Controller, which is particularly useful in potentially unsafe locations, and the integrated network access protection NAP (Network Access Protection). The NAP management function is something like a quarantine system for insecure clients. It is based on NPS (Network Policy Server), which imposes certain requirements on every client that wants to access the Windows server. The isolation strategies DC allow the separate creation and administration of logical networks within the physical networks, so that only accesses of registered clients can be permitted.

The BitLocker tool is available to encrypt data with Server 2008. BitLocker complies with Sarbanes-Oxley and the Health Insurance Portability and Accountability Act (HIPAA) for enterprise data security. BitLocker encrypts the entire system. Those components that are started before the kernel are secured by a kernel integrity check.

In summary, all these features in Windows Server 2008 Standard provide the operation of a reliable and secure server operating system.

Other functions worth mentioning include:

Hyper-V for the virtualization of server systems

Hyper-V for Windows Server 2008 now enables organizations to virtualize without relying on third-party programs. The hypervisor tool allows multiple virtual servers to be deployed on a single physical server. This allows the hypervisor to take on multiple roles that can be managed separately. Hyper-V is managed via the Microsoft Management Console (MMC). In cluster operation, Hyper-V can also be used for live migrations, during which virtual machines can be moved during operation.

This virtualization technique runs on both x64 and x86 processor-based computers and supports Network Address Translation (NAT) and Network Access Protection (NAP). In this way, Hyper-V also helps to conserve typical company resources such as operating costs and power consumption, which are significantly reduced.

Windows Server 2008 is the first operating system from Microsoft to include the command-line shell (command line interpreter) Windows PowerShell. PowerShell is based on the .NET Framework, version 2.0; this enables a user to execute commands interactively on a command line, similar to Windows Script Host, cmd.exe or Unix, for example. For more complex shell scripts the PowerShell Scripting Language is also available here.

Active Directory, the directory service of Microsoft Windows Server for the administration of resources and users, is divided into five roles starting with the Windows Server 2008 version

The previous DCO types in the Active Directory were supplemented by the Read Only Domain Controller (RODC). The RODC is read-only and has a reduced functionality, so that no passwords are managed, so that it can be used as a domain controller especially in unsecured areas.

In the Enterprise Edition, Windows Server 2008 includes failover clustering on the cluster nodes of the operating system. The failover cluster supports the GUID Partition Table (GPT) with a maximum of 128 partitions as well as the dynamic addition of resources, which further improves the high availability of the server.

The Terminal Services have also been enhanced with various functions in Windows Server 2008. These include support for multiple monitors and resolutions up to 1,920 × 1,200 pixels, the provision of programs during a terminal session via RemoteApp, Windows Portable Devices and Microsoft Point of Service for .NET. Terminal services also allow the simultaneous use of local and remote applications on one computer.

Windows Server 2008 Standard convinces with its intuitively usable desktop and the option to choose between several modes: With the Server Manager you have an overview of the current system status at any time and can use it to manage central functions. The integrated WMI interface also provides host functions for management scripts, and with the aforementioned PowerShell you can use existing scripts in bat or vbs format, while the Microsoft Management Console (MMC) provides snap-ins for the various management programs.

In addition, it is also possible to install Windows Server 2008 as a so-called core version; in this case, the graphical user interface is omitted and only the most necessary features are included. The core version not only consumes fewer resources, but also offers a lower attack surface due to the smaller number of installed components, including the server roles.

With an expanded feature set compared to the previous version, Windows Server 2008 has the following increased system requirements:

The licensing model for Windows Server 2008

The licensing of Windows Server 2008 is based on the number of processors contained in a physical server on which the operating system is used, even virtually. Each server license permits the operation of the Windows Server Software 2008 Standard on one physical and one virtual server.

The server license also includes administrator rights for the management and provision of the functions.

Licensing Microsoft Server 2008 Standard via Wiresoft at a special price

Wiresoft offers original server licenses for the Microsoft Server 2008 Edition Standard at a particularly favorable final price. Thus you profit also here from the advantages, which the license purchase with Wiresoft grants you not only for these, but also for all other software licenses: All Microsoft software products available from us are single licenses purchased by European companies.

When making a purchase, you as a customer are on the absolutely safe side, because according to a ruling of the European Court of Justice, the purchase and resale of software products, which includes server licenses and client access licenses, are completely legal.

In addition, all these licenses are 100% usable, because we have checked them thoroughly for their authenticity and usability.

Many of our customers can confirm the advantages of Wiresoft's low-cost licensing offer, which is complemented by our expert advice on the most economical licensing of Windows servers in a company. If you have any questions about your individual licensing with Microsoft Server 2008 Edition, please do not hesitate to contact us: